In the basement of the Library building there is a world of wonder. A secured depot which stores over 6000 of the most marvellous objects from TU Delft’s past. The oldest computer of the Netherlands, magic lanterns, bones, designer tables and chairs, sculptured busts, paintings, a scale model of a wooden boat and many scientific devices. Why would a university want to keep such an odd collection of items? Because they are part of our intellectual heritage and identity, and because we can still learn from them today. 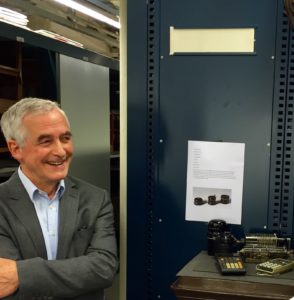 “I’ve got exactly the same calculator at home!”, Karel Luyben exclaims during the official opening of the depot. “In the 1980’s it was my pride and joy.” The rector magnificus walks around the 1500 shelves stacked with objects from our past in amazement. “Our university has such a rich history. The items here all have a story to tell and are a tangible link to the past. They show the inventiveness of scientists, their pioneering work and inspiring teaching materials. The past makes us who we are today. We can be proud of our history.”

In the past scientists had to overcome complex questions, that we don’t even think about these days. Being able to multiply large numbers with the first calculators for example was revolutionary in the beginning of last century. The university’s collection of early, mechanical calculators is therefore of importance today, because It shows the inventiveness of our predecessors and how they were able to translate a number into mechanics. Studying these early calculators in lectures will help modern students to understand these principles. Even when today’s calculators are pocket computers.

The artefacts show the inventiveness of scientists

Some artefacts in the depot were simply collected for the broader academic education of students. Besides acquiring engineering skills, students had to learn about art and beauty by studying paintings, still lifes, watercolors and wall paper designs from the 19th century. And architecture students taught by professor Sluyterman not only had to focus on technical drawings, they also had to be able to draw the lines of sculptures and other intricate objects, such as wall anchors, candlesticks, leaded glass designs and hearthstones. Hence the Sluyterman collection in the depot is extensive. 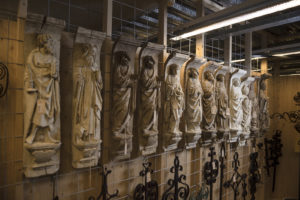 Sculptures from the Sluyterman collection

The heritage depot also stores a true mystery object in the basement: an instrument originally constructed by professor Tienstra. He lived from 1895 to 1951 and taught Land Surveying and Levelling at TU Delft. He left an object, seemingly for measurements, but we do not know how it works and why it was put together in such a way. Solving this mystery would certainly render new insights.

On the other hand, new techniques that have become available can shed a new light on our heritage collection. The bones and samples of animals and plants that in the past were classified and stratified on the basis of external markers and appearance only, can now be analysed with DNA techniques to further identify the species, especially of those that have become extinct.

Our rich history inspires us for the future

Besides the old and wonderful, the heritage depot also holds objects from a more recent past. You will find a model of the proton-synchroton that was built at the Kanaalweg on our campus, for example. And eye catchers such as the Nuna and prototypes of Delft robots are showcased at the Science Centre. When they are no longer on display, they can become part of the TU Delft heritage collection. New ideas and devices we are developing right now, might someday become of equal historical importance. However, not every object is as easy to recognise as such. Simply because it was no longer required for further research, key historic material might have unknowingly gone lost. If you, as a researcher, are not sure whether an object is worth preserving, the new heritage team of curators, educators and historians at the Library is there for advice. They are looking after the university’s past. Not only are they there to preserve and document, they will also put these wonderful heritage objects on display to remind us of our rich history and inspire us for the future. 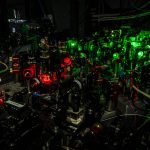 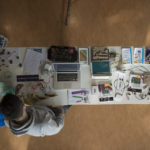